The Tiger Who Came to Tea
by Judith Kerr 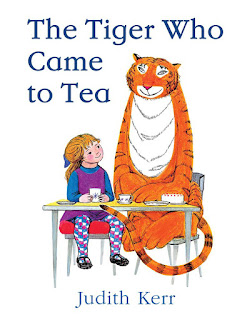 Judith Kerr turns 95 today. At that age, when she blows out the candles she might simply wish for more birthdays. To be fair, that’s sensible regardless of age. But if I could borrow that wish, I would use it to have her tell me the secret of what this mysterious classic is about. I mean, what it’s really about. Fifty years after The Tiger Who Came to Tea was first published, Kerr still insists it is nothing deeper than the story of a tiger visiting a little girl named Sophie. Pull the other one, Judith.

The events begin innocently enough. Sophie and her mummy are enjoying some afternoon tea when the doorbell rings. Sophie’s mummy wonders if it could be the milkman or the boy from the grocer. In 2018, a man putting milk on my doorstep would alarm me nearly as much as a tiger asking to come in for tea, but in 1968 the tiger would have been the more shocking option. So you’d think. But Sophie and her mummy politely invite the tiger inside to share their meal.
The tiger gobbles up all the sandwiches, drinks all the tea from the teapot, scoffs all the buns, biscuits and cake on the table, then makes for the kitchen to eat the supper on the stove, all the food in the fridge, and everything in the pantry. Understandably thirsty, he drinks all the milk and orange juice, all of Daddy’s beer, and all the water in the tap. Think about how parched you’d have to be to drink all the water in the tap. Poor Sophie couldn’t even have a bath.
But to me, the crux of the story is when Sophie’s daddy comes home from work and listens to his wife explain why there is no supper on the table and, more importantly, where his beer has gone. He sits in his chair, patient, slightly worried, thousand-yard stare fixed firmly to his face. What is he thinking in that moment? Is he thinking, oh god, she’s really gone off the deep end this time? Or, nice try love, but I know exactly who drank my beer? Or, simply, here we go again? 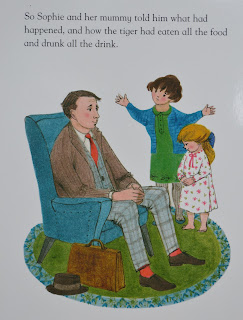 Whatever the case, Sophie’s daddy handles the situation just as any self-respecting British man of his era would. Repression. Denial. Keep calm and carry on. He asks no hard questions, seeks no help for his clearly deranged wife and child. He merely suggests they have their supper at a café. This is not the time for panic, but for sausages, chips and stiff upper lips.
The Tiger Who Came to Tea was Judith Kerr’s first book, published in the same year that her husband, well-known screenwriter Nigel Kneale, had his television play The Year of the Sex Olympics broadcast by the BBC. (Don’t be fooled by the title: it was a perceptive, dystopian work that anticipated reality TV decades ahead of time). Theirs was clearly an imaginative household. Kerr says she was unimpressed at the preachy picture books of the 1950s, so one day when she and her young daughter Tacy were bored at home and wishing someone would visit, she made up the story of a tiger coming to tea.
A few years later, when her children were at school, she finally had time to illustrate the story and have it published. Kerr says she has improved as an illustrator since then, but her clean, beautiful pictures capture not only the mood of the story, but also the fashions of the late 1960s. The tiger was still just a tiger, but Kerr’s own background has led to a persistent rumour that the creature represented something far more sinister: the Gestapo.
Kerr was born of a Jewish background in Germany in 1923 and her parents were friends of Albert Einstein – she once wrote that, at a party in Berlin, Einstein had explained his theory of relativity to her mother. Kerr’s father was a noted theatre critic who had also openly criticised the Nazi Party, and the family wisely fled to France in 1933, shortly before Adolf Hitler’s rise to power. Three years later, they moved further towards safety, settling in London.
But was there something from those early years in Germany that led to the tiger’s tale? Could he represent the Gestapo, the Nazi secret police who could come knocking on your door at any time? It is a rumour that Kerr has steadfastly denied, pointing to the way Sophie nuzzles in to the tiger to indicate that he is really no threat at all. “I don’t think one would snuggle the Gestapo, even subconsciously,” Kerr once said.
Personally, I had wondered if the tiger represented a dark, addictive, or even unbalanced side of Sophie’s own mummy. Remember, all of Sophie’s daddy’s beer disappeared during one weekday afternoon. Recently, the spotlight has started to shine on the “wine-mum” culture. Often celebrated in light-hearted, comical memes, it’s also an alarming reflection of the number of parents (of both sexes) literally being driven to drink by the demands and expectations of parenthood.
At least these days mental health issues (including post-natal depression) are more openly acknowledged and discussed than in the past. As a father, I feel incredibly lucky to spend a lot of time at home caring for my children, and I wouldn’t change it for the world. But it has its challenges, and I could empathise if Sophie’s mummy’s felt she needed to take the edge off her day. My daughter Heidi is about to turn three, and we have certainly experienced our fair share of the Terrible Twos. Worryingly, being a “Threenager” is also a thing, apparently.
Anyway, that's just my theory. As Kerr insists, perhaps the tiger is nothing more than a tiger, the antagonist in a fun, memorable story - and one that Heidi loves. She also loves the Mog stories, for which Judith Kerr is most famous. At 95, Kerr still works every day, has published more than 30 books, and has another one due out later this year. Not bad given that English was her third language. In fact, in 2013, Britain's first bilingual state school in English and German was named after her: the Judith Kerr Primary School in south London. The students will no doubt be celebrating today.