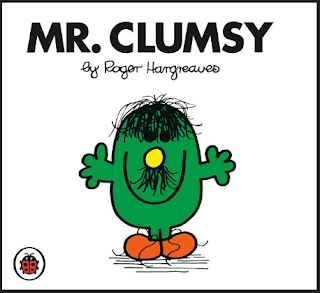 
As a father of two small children, and as a former child myself, I have generally enjoyed your Mr Men series of books, notwithstanding the often unnecessarily verbose text, which makes some of them feel like novellas and inspires a sense of dread when I am asked to read three of them in succession before bedtime, and has led to my subconscious use of 79 words in this particular paragraph when 10 would clearly, obviously, and undoubtedly have sufficed.


However, that is neither here nor there. The reason for my letter is that I wish to complain about an unfair national stereotype perpetuated by your books.


From my repeated readings of the Mr Men canon, I have learnt that Mr Happy lives in Happyland, Mr Clever lives in Cleverland and Mr Nonsense lives in Nonsenseland. This makes sense, in the same way that Thais live in Thailand, Finns live in Finland and northern ire lives in Northern Ireland.

So, why does Mr Clumsy live in Australia?


That’s right, Mr Clumsy does not live in Clumsyland. He lives in Australia.


This, Mr Hargreaves, is nothing but offensive national stereotyping.

You introduce Mr Clumsy as a dishevelled, long-lost cousin of Mr Fussy. This boorish Australian layabout lobs on Mr Fussy’s doorstep and asks to stay. He appears unable, or perhaps unwilling, to comb his hair, tie his shoelaces, or engage in any of the other basic functions expected in a civilised society. When he later stars in his own book, Mr Clumsy is so dense that he puts a letter from the postman in the toaster and tries to read a piece of bread.

Which brings me to another point. I understand the word ‘clumsy’ to mean ‘awkward’, or ‘ungainly’, but you apparently think it means ‘idiotic’. This character is effectively ‘Mr Stupid’, but you clearly realised that introducing Mr Stupid from Australia would be crossing the line, so you softened his name while retaining his moronic nature. Spilling your beer while dropping a catch during a game of backyard cricket is clumsy Australian behaviour; toasting an envelope is simply inane.

Please understand, Mr Hargreaves, that although we recently had a prime minister who tried to eat an onion like it was an apple, and a deputy prime minister who was unaware that he was a citizen of New Zealand, we are not all idiots. I will admit that two of the four members of my household are unable to tie their shoelaces, but this is because they are aged one and two respectively. The fact that they are Australian is purely coincidental.


Perhaps political correctness had not yet gone mad when you introduced Mr Clumsy in 1976, but since then it has become certifiable. As such, I request that when the series is next reprinted, Mr Clumsy should come from Clumsyland rather than Australia. At the very least he should hold dual citizenship, which admittedly would preclude him from running for Australian parliament, but in any case we have enough oafish behaviour in that institution without adding Mr Clumsy to the mix.

I have been told, Mr Hargreaves, that you died 30 years ago, and I therefore understand that you may face certain difficulties in replying to my letter. Nevertheless, I shall await a response via the late mail.