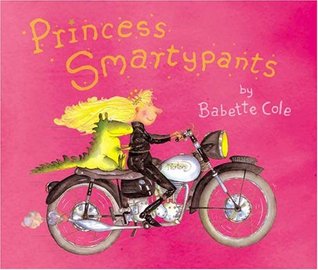 After Babette Cole died in January, The Guardian summed up her career rather well: “She created books on the kinds of disgusting topics that children love and adults mostly do not, and then, emboldened by their success, she went on to more controversial subjects, partly because she liked to shock and partly because she felt she had a duty to make sure children were properly informed.”

Her publisher summed her up even more succinctly: “She was as mad as a box of frogs”.

Her most famous book is probably Princess Smartypants, a reimagining of the traditional fairytale in which the helpless princess is whisked off her feet by her prince charming. But in Babette Cole’s version, the princess is a fiercely independent woman who is pressured by her parents, the king and the queen, into finding a man. Her attitude is clear from the first line of the book:

Princess Smartypants did not want to get married. She enjoyed being a Ms.

And so, to humour her parents, the princess sets various seemingly impossible tasks for her suitors. One by one they fail, until the princess is left alone in her castle to carry on happily on her own. But then Prince Swashubuckle turns up, unexpectedly completes all her various challenges, and thinks he has won her heart. Instead, her kiss turns him into a warty toad and the princess lives happily ever after. Prince Swashbuckle presumably gets turned off women forever – human ones, at least.

Not much about Princess Smartypants is subtle. It does not have a feminist undertone, rather a feminist monotone. The main character is spoilt, selfish and mean. Poor Prince Swashbuckle was only trying to be kind, and she turned him into a toad. And yet, is any of that a problem? Probably not. Sometimes a good bashing over the head is necessary to get the message across.

It is worth noting that this book was written in 1986; 25 years later Australia had a female prime minister who was castigated for being “deliberately barren”, and a further five years down the track the USA has a president who says of women “grab them by the pussy”. So, yeah, still a fair way to go on the whole equality thing.

What is most fascinating – though not surprising – is the way that much of Babette Cole’s work divides opinion. A sample of Goodreads reader reviews of Princess Smartypants gives you the idea:

"From the lowbrow names of "Prince Pelvis, Swimbladder, Boneshaker, Grovel etc. and the overall disrespectful, non-familial attitudes to the man-hating, lying, deal breaking princess this book was feminist rubbish from top to bottom." (From a 1-star review)

"...great sense of humor and a beautiful message about being yourself and standing up for what you believe is right." (From a 5-star revew)

"This book seems to be telling girls that they would be better off without a husband and family. Definitely not the message I want to share with my little girls." (From a 1-star review).

And this from a more measured 3-star review:

"Books like this and the Paper Bag Princess seem to reinforce the idea that, in order to be a feminist and be independent, (1) you have to be mean to men, because they are bad, and (2) you have to be alone. It seems the implication is that if the character did get married or even have male friends, she would automatically give up all her independence and become a mindless cooking-and-cleaning drone (or a mindless gown-wearing ball-attending drone)."

I should point out that all of these reviews were written by (or, at least, appear to have been written by) women. But if good art polarises opinion, the same is often true of good literature – and why not children’s literature, too?

Several of her other books similarly divide opinion, including Hair in Funny Places, which deals with puberty, and Mummy Laid an Egg, a book about the facts of life that features graphic illustrations of various adventurous sexual positions. Her work often dealt with serious issues in an absurd manner, and her cartoonish pictures only add to the effect.

One last note on Babette Cole, unrelated to this book. Although she was only 67 when she died in January, she was lucky to have lived that long. Two years ago she was nearly killed when she was trampled by a herd of cows. She suffered broken ribs, a fractured shoulder blade and lacerations all over her body. Her left ear was left hanging off and had to be stitched back on by a cosmetic surgeon.

But her final word in the aftermath of the ordeal rather summed up her ability to shock. How would she deal with cows now? "I'm going to eat a lot more steak!" she said.
at March 24, 2017