Grug Plays Cricket
by Ted Prior 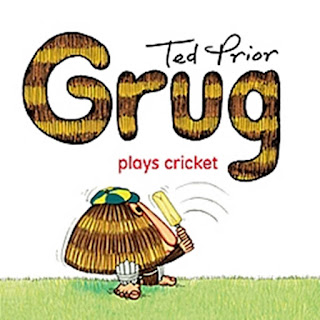 Not since the One-Legged XI played the One-Armed XI in England in 1848 has cricket seen anything remotely like this. On a green pitch indistinguishable from the outfield, a snake named Cara, overcoming the significant obstacle of having no arms and no legs, held Grug to a remarkable scoreless tie that left the cricket world stunned.

As the host, and thus most familiar with the conditions, it was a humiliating result for Grug, who had invited Cara to play expecting an easy win. But over the previous few years Grug had spent his time cycling, swimming, gardening, painting, and engaging in all sorts of other irrelevant activities that that left him ill-prepared for a major cricket match.

Although nobody really knows what Grug is, he indisputably has two arms and two legs, and thus a natural advantage over Cara. It is not out of the question that anti-corruption authorities could inspect the betting markets around this match, but the likelihood is that Grug simply succumbed to hubris.

Sending Cara in to bat, Grug began with a delivery that beat Cara’s paltry defences and rattled the middle and leg stumps. Cara had batted with a grip rarely seen in elite cricket, holding the bat in her mouth, but she made a game swing at the ball, and in fact looked more likely to score than former New Zealand No.11 Chris Martin. 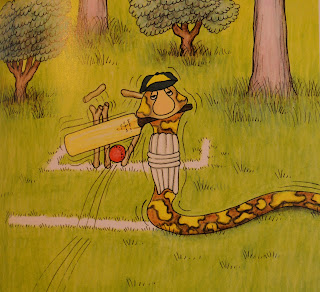 Cara was more at ease when bowling. Gripping the ball under her chin (do snakes have chins?) she formed herself into an imposing S shape and then flung the ball down the pitch. Her unconventional action may have looked suspect but was in fact perfectly legal; the ICC bans "chuckers" whose elbow extension exceeds 15 degrees. Cara's complete lack of elbows made the rule redundant.

Cara resembled nothing so much as former speedster Jeff Thomson, rolling up and going "whang", and Grug, who had spent far too little time in the nets ahead of this game, was slow to react. In the words of commentator Ted Prior: "Grug swung the bat and missed. The ball hit him on the nose!" It was an apt description, and typical of Prior's concise commentary style.

Though shaken by the incident, Grug passed the mandatory concussion tests and batted on, driving the next delivery hard and straight back towards the bowler. Cara showed her remarkable reflexes by catching the ball in her mouth, which brought back memories of Shahid Afridi chewing on a ball during a one-day international.

It meant that neither Cara nor Grug had scored in their first innings, and Cara was soon to complete an ignominious king pair when she again swung hard but lost her middle stump. This left her needing to once again dismiss Grug without scoring in order to emerge from the match with a tie.

Things looked grim for Cara when Grug smashed the next delivery high into the air through the region of extra cover, which appeared to be vacant, but a pelican unexpectedly flew past at an opportune moment and Grug was caught. Not since Gary Pratt ran out Ricky Ponting in the 2005 Ashes had a substitute fielder had a more significant impact.

The match had been tied, and although both players finished the game with smiles on their faces, it was easy to see through Grug’s façade. Indeed, Grug failed to appear at the post-match press conference, and is believed to be considering immediate retirement from the game.
at January 22, 2017

Email ThisBlogThis!Share to TwitterShare to FacebookShare to Pinterest
Labels: Australian books, Ted Prior