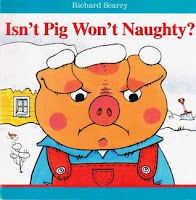 
How can I answer when I don't even understand the question.

Last time I saw contractions this close together, Heidi was about to pop out.

I know the words, but together they make about as much sense as a bad translation. Or the phrase “humorous Adam Sandler movie”.

I feel as bewildered as the Springfield Elementary students when Principal Skinner tells them to “stand down”.

To be fair to one of the most beloved names in children’s picture books, this was not actually written by Richard Scarry. Or else it was a hell of an achievement, because he’d been dead for 16 years when it was published in 2010. I'll have to do Scarry justice and review an original at some point.

The Richard Scarry Corporation produced this, one in a set of board books designed for real littlies like Heidi. She loves to sit and turn the pages and although she’s getting strong, she can’t possibly rip them. So there’s that to be said for Isn’t Pig Won’t Naughty?

And there is also this: the title got me to read the book. (Oh yeah, and, um, Heidi too). I had to work out what the hell was going on.

It turns out it’s the story of two brothers named Pig Will and Pig Won’t. Why don’t they share a surname? I dunno, I guess they’re like Charlie Sheen and Emilio Estevez.

Pig Will is the good brother, like Emilio, and says "I will" to everything his parents ask, including putting on a hat when he plays in the snow. Pig Won’t is a bit of a dick and says "I won't" to everything, and ends up with white powder all over his face and nose. Like Charlie.

Next time I think I’ll choose something easier to understand. Ulysses, maybe.