Animalia
by Graeme Base 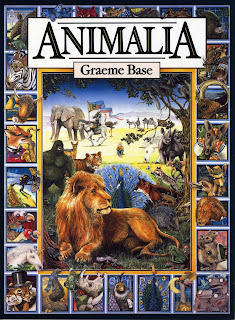 I always knew Graeme Base was good, but it was a touch of divine inspiration that really made me praise him. Tucked away in the bottom right corner of Animalia’s D page, just below a dachshund, you can see the corner of a piece of paper. Most of it runs off the page, but you can read “1 Thou shalt have no”. Clearly it’s the beginning of the Ten Commandments. Why is it on the D page? Because the Ten Commandments are also known as the Decalogue.

Disappointed as I was that baby Heidi failed to appreciate this nuance – she didn’t seem to pick the dodecahedron either, but then Maggie Simpson struggled with that one too – I had to admire Graeme Base. It is so rare to find a picture book that has something for everyone, but he achieves it. On that page alone, little kids can point to a dog or a dragon, older children can pick out dynamite or Doctor Who, and adults can feel smug at identifying the hard stuff.

Like the Decalogue. Or the crab (decapod, get it?). Or the inscription of 6th June, 1944 (D-Day, you with me?). Or the framed picture of a man looking nervously up at a sword hovering above his head. Alphabet books are a dime a dozen – hey, this D game is easy – but usually this page would feature a dog or a duck, or another dull cliché. But a depiction of Damocles in an alphabet book for kids? Now you’ve got my vote.

I shouldn’t have been surprised. As a kid, I spent hour upon hour poring over another Base classic, The Eleventh Hour. Even after I knew whodunit I was still searching for the rest of the hidden clues that pointed to the culprit who ate all the food for Horace the Elephant’s birthday party. It’s possible that Graeme Base contributed more to my lifelong love of crime and mystery novels than any other author. He himself was inspired by Agatha Christie.

The Eleventh Hour was full of puzzles, codes, hints, riddles, poetry and games, all wrapped up in the guise of a children’s book. And there was even a cricket match. What was not to love? Most of all, it was a work of art, like all of Graeme Base’s books. To call him merely an author is a bit like calling Paul McCartney just a singer. True, his words brilliantly add to the atmosphere, but his trademarks are those rich, dense, colourful illustrations.

So much time goes into them. Years, in some cases. In fact, you know what else he could have drawn on Animalia’s D page? Daniel Day-Lewis, an artist of similarly complete immersion. Typically, several years pass between Daniel Day-Lewis roles, because he chooses carefully and researches thoroughly. That’s how I think of Graeme Base. He might only release one book every three or four years, but it will always be quality. (Enid Blyton spat out 33 books in 1949 alone, just saying).

Animalia was first published in 1986, three years before The Eleventh Hour. But I spent far less time with Animalia as a kid, mostly because we didn’t own a copy. I recall it from school, or borrowing it from the library, but I remembered only the essence of the book, not the detail. And what detail there is. Each page has a few alliterative words to describe the illustration – “Diabolical dragons daintily devouring delicious delicacies” – but there is so much more to the pictures.

In his introductory poem, Base challenges the reader:

“For many things are ‘of a kind’
And those with keenest eyes will find
A thousand things, or maybe more –
It’s up to you to keep the score”

I haven’t counted, but a thousand wouldn’t surprise me. And on every page, there is something for everyone. Including a hidden picture of the author himself as a boy – it’s like a Where’s Wally in a book that’s already full of challenges. Kids can turn browsing Animalia into a competition. Who can identify the most things? And with references from mythology, mathematics, music, and minutiae of all kinds, it is a trivia lover’s dream.

There is barely a blank space in Animalia. I flashed back to Mr Scally’s classic time-filler during art class when I was in Prep. When we were drawing, he told us we could leave no white space at all. I used to use my yellow crayon to colour in any blank space behind my house or tree or whatever, and said I was drawing "air". If only I’d had Graeme Base’s imagination. And talent.

I read an interview with Base in which he described his love of problem solving. How am I going to create this picture so it is appealing but also conveys this information? He does so by providing illustrations that are truly luxurious, giving more bang for your buck than almost any other author. You can come back to Animalia time after time after time and always spot something new.

His approach to “X” is particularly praiseworthy. Xylophones are the ultimate cliché in children’s alphabet books. You won’t find one in Animalia; it is so conspicuously absent that it seems as though Base decided a xylophone was too easy (though there is a glockenspiel on the G page). Instead you will find the semaphore and sign language symbols for X, and the words – “Rex Fox Fixing Six Saxophones” – are ingeniously depicted in a mirror so the X comes first.

As an aside, Base in the same interview also described his own inquisitive nature. This quote did not surprise me at all, given his obvious attention to detail:

“If the toaster breaks here, I don’t buy another toaster; I take it apart and find out what’s wrong with it. How can I fix it? It’s not being cheap. It’s just wanting to know. I think I have an enquiring mind.”

He said his ideal dinner party guests would be Bill Bryson, Stephen Hawking, and someone else whose name escapes me but who apparently was dead in any case. Bill Bryson is my all-time favourite writer, Stephen Hawking the world’s finest brain, and Graeme Base in a league of his own as a children’s author and illustrator. Can I please have the fourth place at that table?