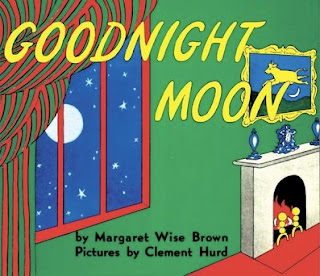 Next year, Goodnight Moon turns 70 years old. It has sold more than 14 million copies since it was first published in 1947 and is one of the most beloved bedtime stories of all. And yet, until recently I had never read it. I’m not even sure I had heard of it until I saw it on Heidi’s shelf, a baby-shower gift that I hadn’t noticed before.

So we read it. And I thought: “What the hell was that all about?”

There was something vaguely unsettling in the pages, haunting even. The stark red and green colour scheme, the vast room, the single red balloon hovering in the corner, the “quiet old lady” who is actually a rabbit and who is sometimes there and sometimes not. It was all a bit ... eerie.

In the great green room, a little rabbit lies in bed saying goodnight to everything he can see. And some things he can’t. Goodnight comb. Goodnight chairs. Goodnight mush. Goodnight nobody. Goodnight air. Goodnight air? That’s a kid desperately trying to drag out his bedtime.

I later read that George W. Bush nominated Goodnight Moon as one of his favourite books. And again I thought of Brick.

Anyway, back to the book. I wasn’t the only one who found it creepy. Zoe felt there was something Twin Peaks-ish about it. “What is the bowl full of mush?" she asked. “Is it porridge? Is it soup? Is it laced with LSD?”

I thought that a single reading nearly 70 years after publication was perhaps not the fairest way to assess Goodnight Moon, so I did some research. The author, Margaret Wise Brown, was interviewed by LIFE magazine the year before Goodnight Moon was published:

The first draft of a Brown book is usually written in wild, enthusiastic haste, in lost unintelligible soft pencil on whatever scraps of paper are available; the backs of grocery bills, shopping lists, old envelopes. “I finish the rough draft in 20 minutes,” Miss Brown says, “and then I spend two years polishing." She is currently polishing 23 books more or less simultaneously.

Brown only wrote, she did not illustrate, so the artwork fell to her friend and collaborator Clement Hurd. And there are some curious aspects to the illustrations, not the least of which is that the characters are rabbits. Apparently this was simply because Hurd was better at drawing bunnies than people.

Brown might have polished her words but you know what they say, you can’t polish a Hurd.

There are peculiar details if you look closely. On the bunny’s bedside table is a book with a green cover. Turn the page upside down and you’ll see it is a copy of Goodnight Moon. It is no surprise to find such a touch of absurdity.

One of the strangest pictorial elements is in the framed illustration over the fireplace in the little bunny’s room. It depicts a cow jumping over the moon, but the cow’s udder is hard to make out. In the words of Brown’s biographer, on the publisher’s instructions the udder “was reduced to an anatomical blur, so as not to disarrange the fragile sensibilities of some librarians”.

I can just imagine the library detective Mr Bookman, perhaps my all-time favourite Seinfeld guest character, enforcing that himself. “This is about that kid’s right to read a book without getting his mind warped. Or maybe that turns you on, Seinfeld, maybe that’s how you get your kicks.”

The mysterious blurred udder didn’t help. When it was first published, the New York Public Library refused to stock even a single copy of Goodnight Moon. It considered the book “unbearably sentimental” and did not acquire its first copy until 26 years later.

Children’s books, the library believed, should be fairytales or folklore, classics rather than the absurd modernity of Goodnight Moon. But Brown was ahead of her time. She had studied at an education college whose founder wanted to create a new style of picture story books, called “Here and Now”. At its core would be the everyday experiences of a regular toddler.

And that’s what kids respond to with Goodnight Moon. The bedroom is a place they know. The objects are familiar, although less so 70 years later. None would now recognise the old style telephone on the bedside table. Then again, why does a toddler need a phone by the bed anyway?

The concept of saying goodnight to random stuff, baffling as I found it on first reading, is actually quite sweet. Heidi is forever waving at anyone and anything, animate or inanimate. Even the blank “goodnight nobody” page seems true to life. Kids do say the darnedest things. The author gets inside the mind of a tiny child and uses soothing rhyme and rhythm to great effect.

To adults, the room seems abnormally vast. But Goodnight Moon wasn't written for adults. To a toddler, any room seems enormous. Their world is so small, their perspective so different from their parents. On a second and third reading, I realised that everything I found strange made much more sense from the little bunny's viewpoint.

As the pages progress and the bunny gets more tired, the illustrations become just a touch hazier. The final line – “goodnight noises everywhere” – acknowledges that bedtime for the little ones is early, while the rest of the house remains active.

Margaret Brown was perhaps more Wise than I first gave her credit for.

Then again, she died aged 42 when, after emergency surgery for appendicitis while on a publicity tour in France, she kicked up her legs, cancan style, to show how fit she felt. That dislodged a blood clot in her leg, which quickly travelled to her brain and killed her instantly.

Not so Wise after all.