Roger Hargreaves predicts the US presidents

The 43rd book in the Mr Men series was Mr Cheerful. The 43rd US president was that grinning idiot George W Bush.

The 44th book in the Mr Men series was Mr Cool. The 44th US president is Barack Obama.

The 45th book in the Mr Men series was Mr Rude. The 45th US president will be Donald Trump.

Look at this sequence and tell me the late Roger Hargreaves wasn't Nostradamus. (Well, along with his son Adam, who now writes the series).

Mr Rude is a weird shade of orangey-red. He insults everyone. He has a doormat, but has crossed out the word “WELCOME” and scribbled “GO AWAY”.

If he met someone overweight he would shout, “Fatty! You’re supposed to take the food out of the fridge, not eat the fridge as well!"

The good news is that by the end of the story, Mr Rude’s rage has eased, and Mr Happy has taught him manners. (Mr Happy is 3rd in the Mr Men series, so maybe Trump needs to spend some time at the Thomas Jefferson Memorial).

The even better news is that the 46th book in the Mr Men series is Mr Good. 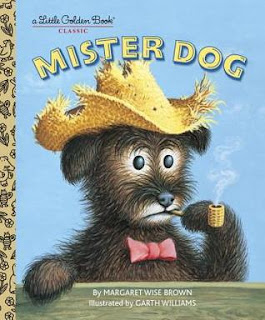 I wonder how Margaret Wise Brown pitched this story to the Little Golden Book people?

“Well, Miss Brown, we liked The Color Kittens and The Seven Little Postmen. What have you got for us this time?”

“I’ve decided to take my next book in a slightly different direction. Picture this. A hairy, Republican nudist – no, it’s okay, stay with me – convinces a little homeless boy to come and sleep with him. It has a wonderful moral.”

Perhaps not. Nevertheless, that’s more or less what happens in Mister Dog, surely one of the most peculiar picture story books in existence. It begins with a depressed-looking mutt pouring milk on his cornflakes, dressing-gown gaping open at the front. Why go to the trouble of wearing a dressing-gown and slippers in the morning when you leave the house in the nude? And is that a bone in your pocket or are you just happy to see us? Oh. Oh, it literally is a bone in your pocket. 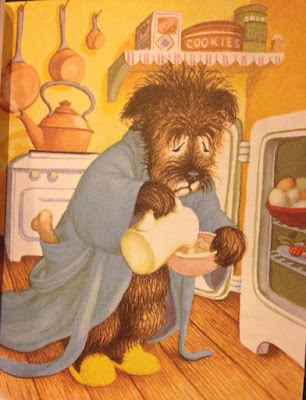 He certainly doesn’t look happy to see us. In fact, he looks like the weight of the world is on his shoulders. Either that or he’s had a massive night and needs hair of the dog rather than cereal and strawberries. Check out the front cover at the top of the page. Look at his eyes. Has Mister Dog has seen disturbing things that he cannot unsee? Or is that something stronger than tobacco in his corncob pipe.

But the best part is when we are told that Mister Dog is "a conservative". That is a direct quote. And note the italics. It is a word that Margaret Wise Brown wishes to define. “He liked everything at the right time – dinner at dinner time, lunch at lunchtime, breakfast in time for breakfast, and sunrise at sunrise, and sunset at sunset. And at bedtime he liked everything in its own place – the cup in the saucer, the chair under the table, the stars in the heavens, the moon in the sky, and himself in his own little bed.” 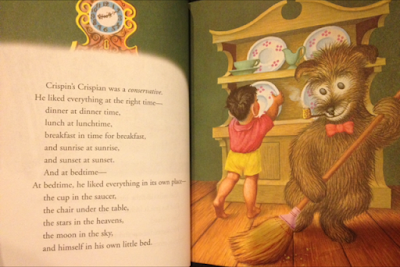 Yeah, you gotta watch those damn liberals, they’ll move sunset to the morning just to keep the unions happy. It’ll be a two-hour working day. Only Eisenhower will keep the stars in the heavens and the moon in the sky. A vote for Adlai Stevenson is a vote for chaos.

Still, it’s a rather quaint 1952 view of conservatism. What might the 2016 version say?

“Crispin’s Crispian was a conservative. And not a pathetic thumb-sucking moderate. A proper Tea Party-loving, Trump-voting, gun-toting far right conservative. He liked everything at the right time, which was whenever he damn well wanted. He liked everything in its own place – the cup in the saucer, the chair under the table, and the Mexicans in Mexico, south of the wall.”

Margaret Wise Brown died the same year this was published, and I can’t decide if she was an eccentric genius or a nut-job. She is best known for Goodnight Moon, which was haunting and strange, but Mister Dog is at least a little warmer, thanks to Garth Williams’ fun illustrations. Williams was probably best known for illustrating the classic versions of Charlotte’s Web and the Little House on the Prairie series.

Yet for all the peculiarities (and there are a LOT of them), Mister Dog has a very valid message. Its subtitle is “The Dog Who Belonged to Himself”. He answers to no human family and asks nothing of the state. He is clearly a classic conservative lover of small government.

One day, Mister Dog meets a little boy who is fishing in a stream. “Who and what are you?” Mister Dog asks. The boy replies: “I am a boy, and I belong to myself”. Note that the boy does not introduce himself by name but as “a boy”. Yet another oddity. Mister Dog is glad, and invites the boy to come and live with him. The boy agrees, with an alarming lack of due diligence.

Then they went to a butcher shop – "to get his poor dog a bone," Crispian said. Now, since Crispin’s Crispian belonged to himself, he gave himself the bone and trotted home with it.

Note the direct quote. Why would Mister Dog say he wanted “to get his poor dog a bone”? He should say “to get my poor dog a bone”. Who edited this stuff? Anyway, then the little boy prances off happily with Crispin/Crispian, blissfully unaware that soon he will be tidying a dog’s living room. They make dinner at Mister Dog’s house and each of them, in Brown’s words “chewed it up and swallowed it into his little fat stomach”. Then boy and dog sleep in side-by-side beds.

For all of Margaret Wise Brown’s oddities, I think she knew how to tap into the brain of a child. The word “belong” resonated with me. As a child, I heard it often. I “belonged” to my parents and my friends “belonged” to theirs. “Who does such-and-such belong to?” adults would ask each other. This never sat well with me, for I felt that nobody owned me. This is the child-like mindset Brown exploits (and which Mister Dog then exploits with the little boy).

But Brown also implies that you’ll be happier if you let people into your life. Look how despondent Mister Dog appeared when preparing his breakfast cereal, back before he had met the boy. And look at how happy he was afterwards. You can be yourself and belong to yourself without having to keep to yourself.

Mister Dog is strange, confusing, disturbing, and utterly unique. And I love it. If I was American and Crispin’s Crispian was on the presidential ticket this year, I’d vote conservative. He wouldn’t build a wall to keep the Mexicans out. Although there is a fence around his house and a sign that says “NO CATS”, so I guess you never know.
at November 07, 2016 5 comments: